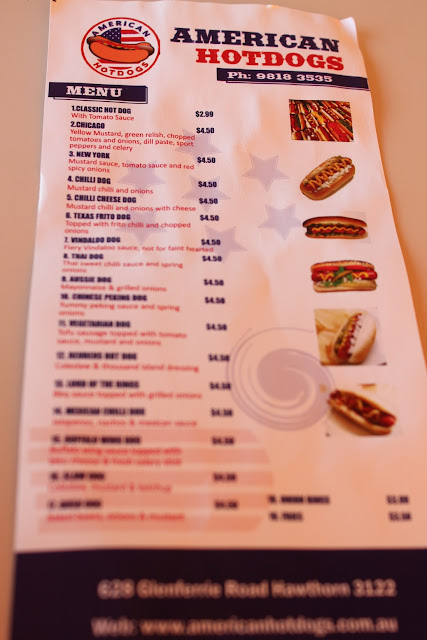 Sometimes I don't get the derision of American food. I get the slamming of the obesity rate with obscene servings and much as I watch the occasional episode of Man v Food and Adam Richman seems like a perfectly nice guy, I do cringe at the insane amount of serving and food wastage.

Now I've been craving some A & W hot dog with the coney dog sauce mince meat and all but we never had A & W here in Oz. We did have A & W in Singapore when I was a wee lil girl. I remember parents getting root beer floats, waffles, coney dogs, tangy fish fillet burgers through the drive-thru.

So imagine my squeal of delight when S & I drove past American Hot Dogs, dogs and all in the car (and no, not all Asian eat dogs) and we just had to stop. I was hoping for some coney dog but hey, I got the next best thing - Chilli Dog with Cheese. S got their daily special the Glenferrie Dog.

The buns were soft and warm and to be honest, their hot dogs are run-of-the-mill average but I've got no complaints. After all it's the toppings that counted.

My Chilli Dog was topped with cheese, onions and chilli. Not the most generous serve of chilli, and it didn't have the hit of spices that I was expecting. And I so wish they had a bit of mince in it. Instead it was rather beany and I guess there's nothing wrong with that. Texturally the mince would have been great for it but the crunch of the onions and the ooziness of the melted cheese makes up for it somewhat.  I'm not knocking it completely. It's alright, not phenomenal but I would order it again if I'm in the area. The Vindaloo I'm thinking.

S had the Glenferrie Dog, which was basically bacon, cheese and onion for toppings. It was fine and exactly what you expect and could just as easily have made up at home. S commented the service was friendly and they made up the orders on the spot.

They do have a variety though. I've attached a menu but otherwise check out their website.