The thought of ramen fills me with the familiar waft of childhood memories and steam fogging up little glasses.

It seems the ramen gods have skipped Melbourne in the ramen sweepstakes. In an endless search for what appears to be a deceptively simple dish of soupy "instant noodles" in my beloved home state, it has surely become a complicated fruitless journey. 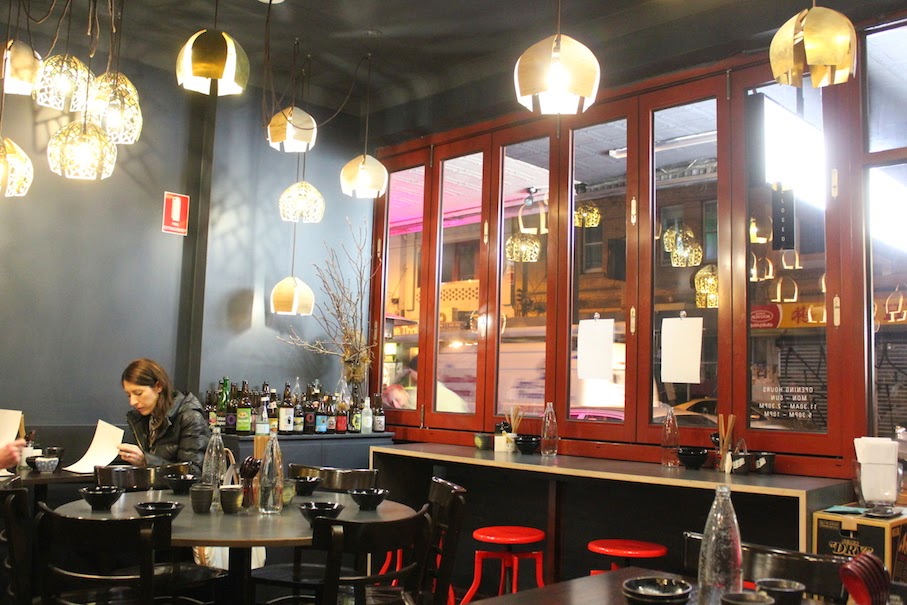 We were graciously hosted by Jonathan, Shizuku's manager, on a cold winter night made for greedy souls soul-warming soups. The email exchanges with the owner sounded promising. We were excited and hopeful for the taste of slurping up noodles as loudly as we could old Japan.

The restaurant had a great selection of beer. My dining companions would have loved some recommendations for pairing with their choice of ramen. 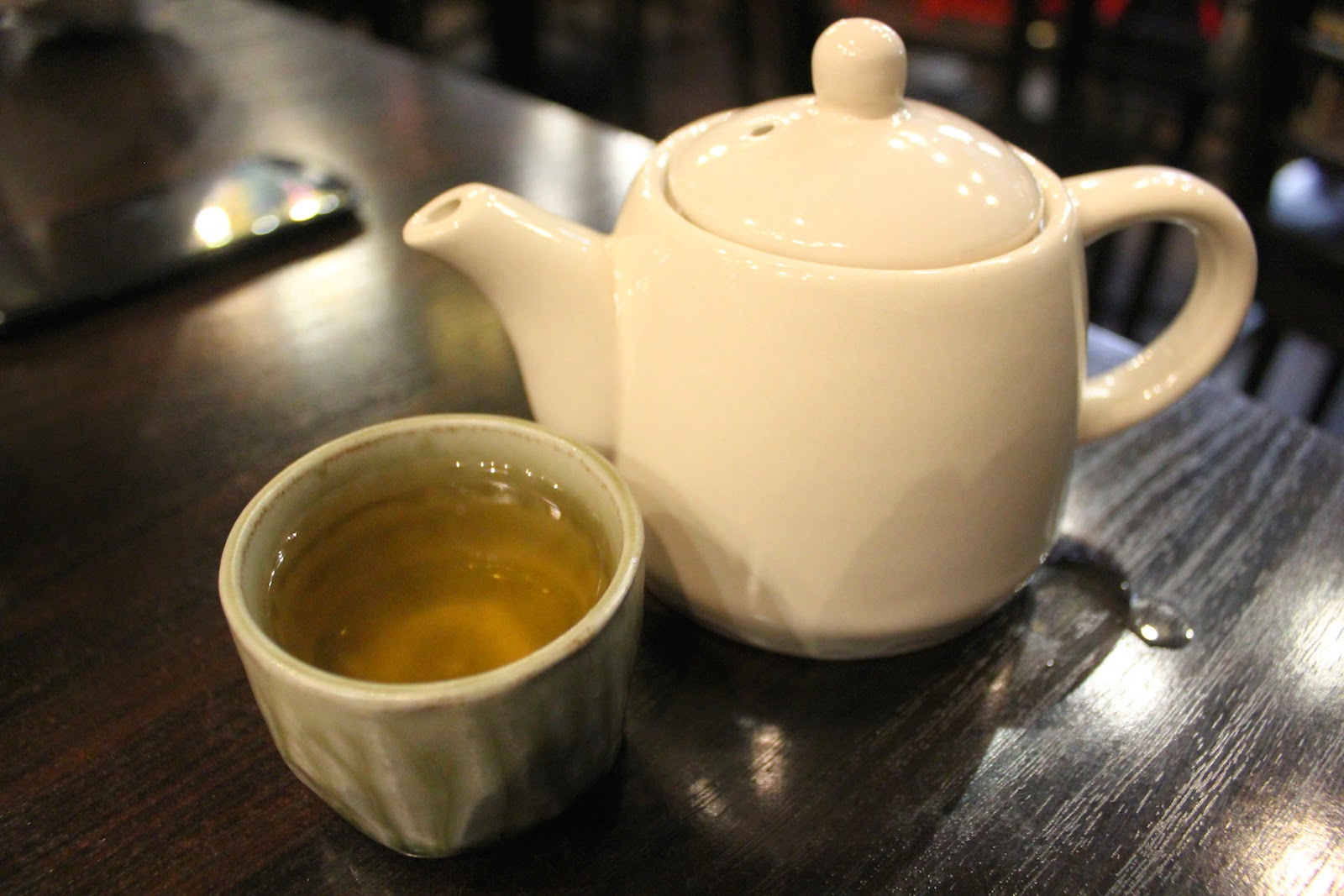 I opted for a pot of green tea. It was soothing with the smokiness of roasted corn kernels. 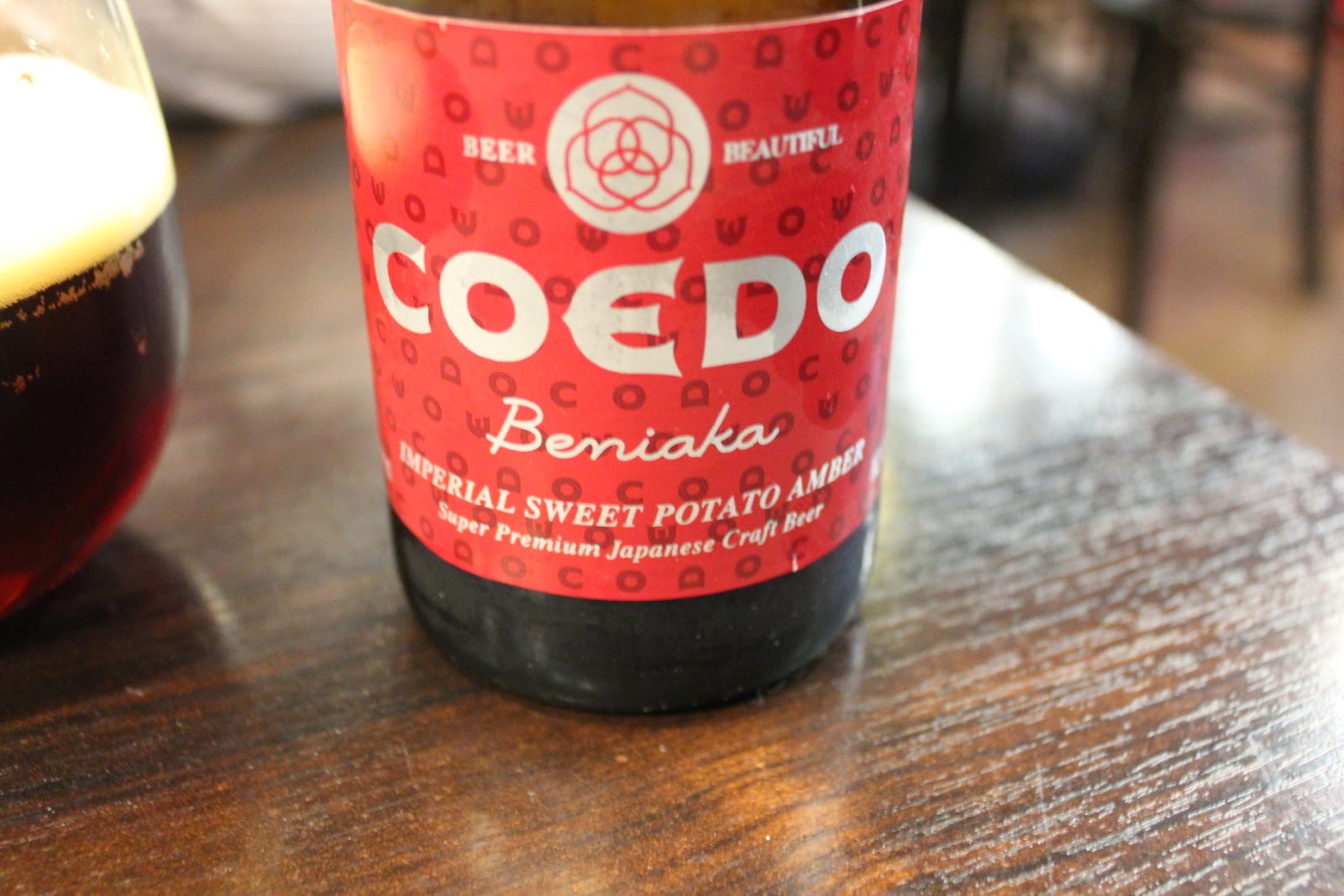 One of our dining companions decided on a Japanese sweet potato beer, a dark rich amber liquid with tones of bitter dark ale. 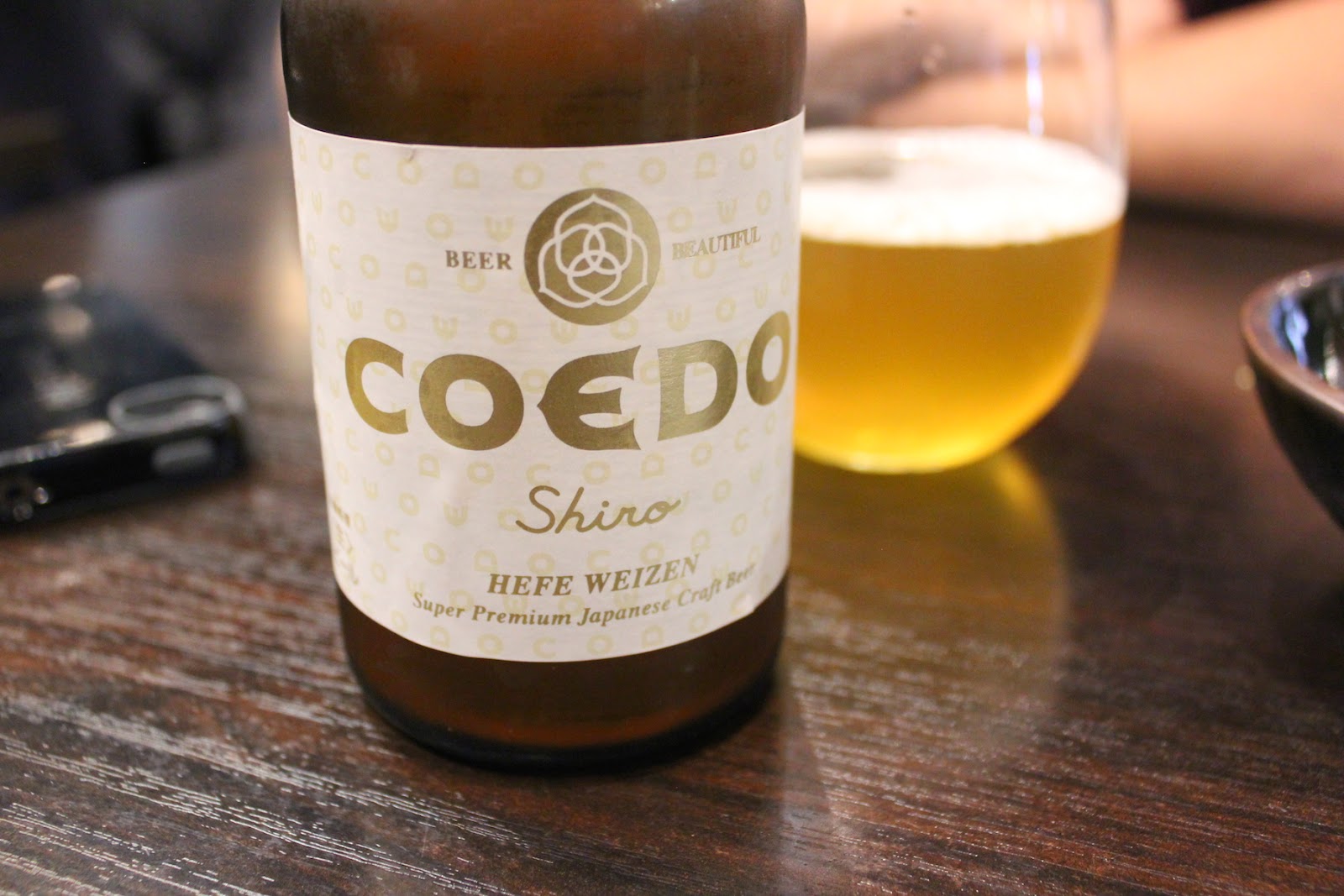 Our rookie on the CF team chose a traditional wheat beer, much lighter and golden in appearance. 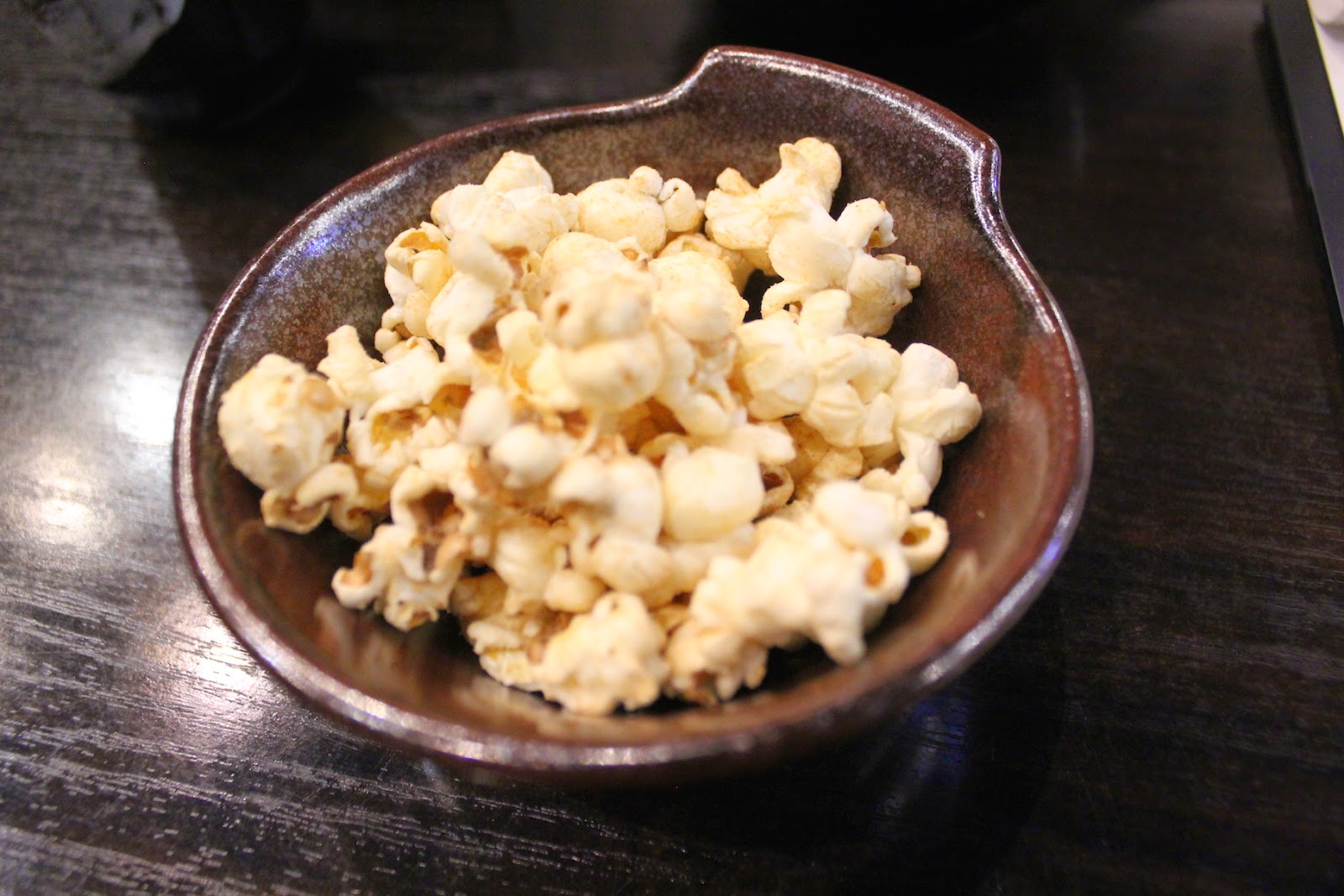 The soy popcorn was a fun touch and start to the evening. I can definitely taste the soy aftertaste in the popcorn and although nothing and I mean NOTHING EVER  beats butter EVER, the hint of soy sauce was light and pleasant, even as I exhale, the aroma creeps through the nasal canal. 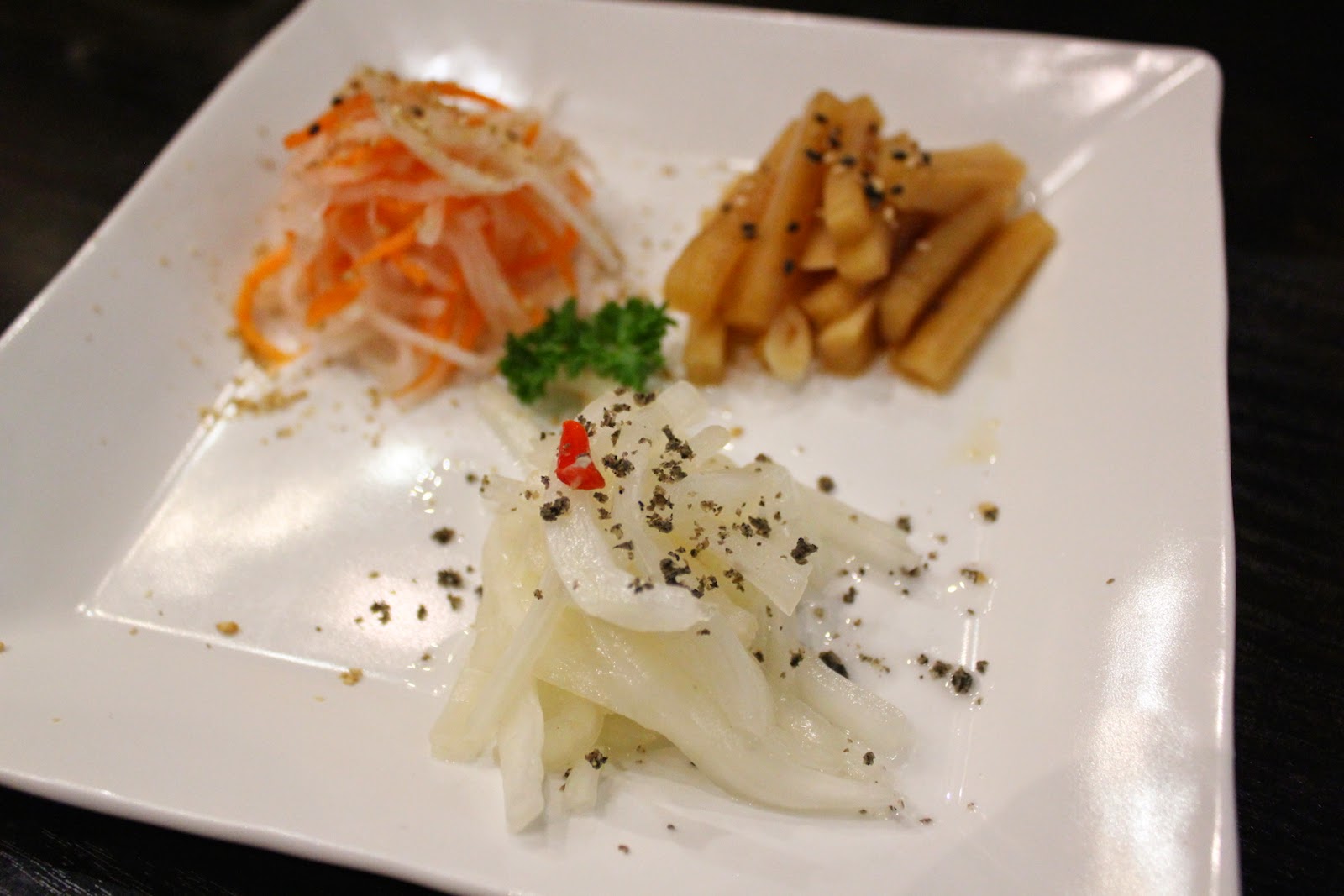 The trio of pickled vegetables was a great palette cleanser and certainly refreshing. Generous in serve, the carrot/radish combo was perfectly forgettable cured but not a stand-out. The wombok was a bit of a surprise. Wasn't expecting the interesting juxtaposition of textural crunch coupled with juiciness. Light sprinkling of ground black sesame seeds added yet another taste element. The soy-based garlic radish pickles was my favourite. Piquant, fragrant and solid in form, it was suitably pegged for a delightful little snack I went back to throughout the meal. 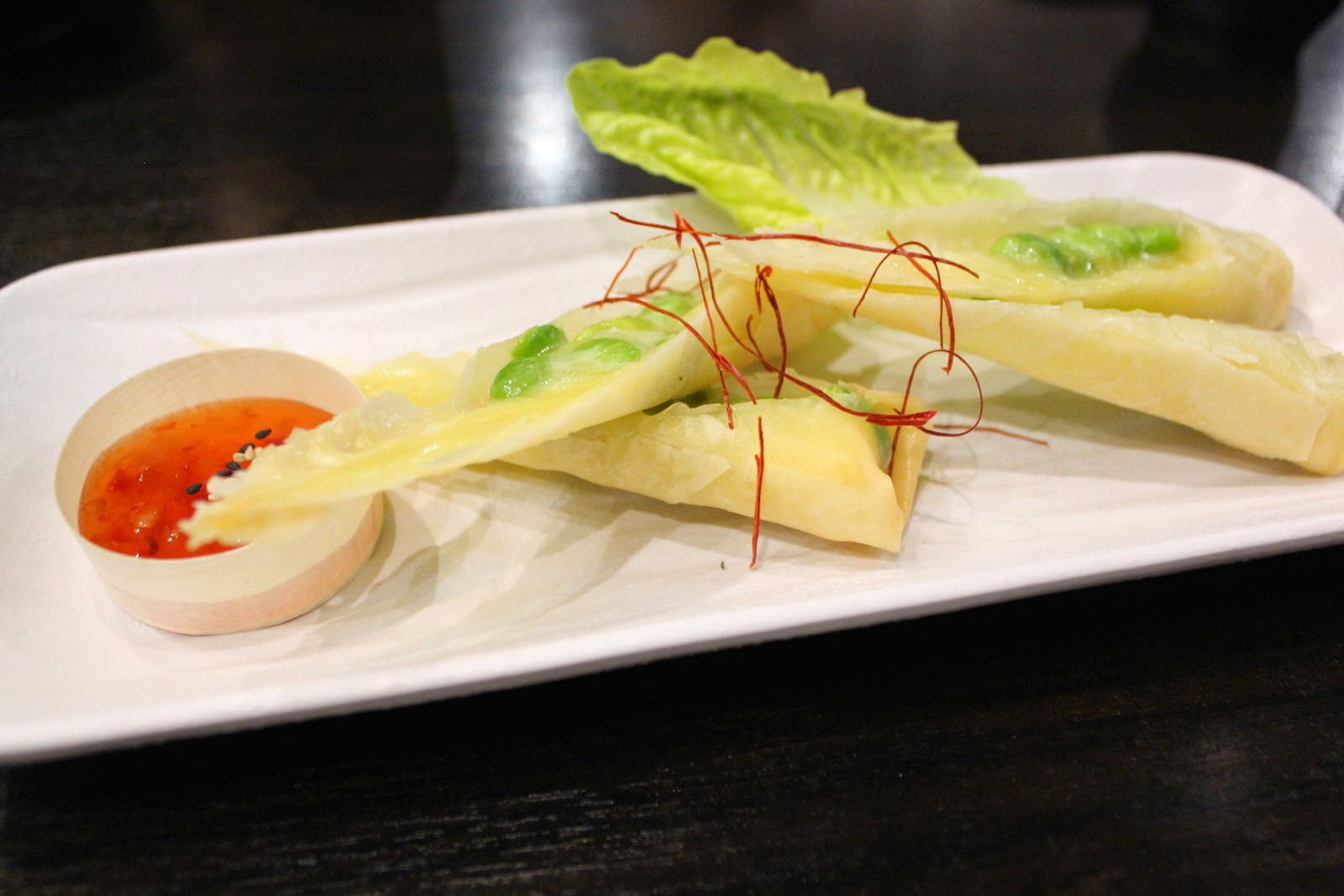 The next dish was superb in presentation and I do like the twist of modern flair in traditional cuisines like Japanese or French. The concept in itself was brilliant, but I question the execution of pairing the rather pedestrian efforts of melted Colby cheese (perhaps) with edamame and spring roll (popiah) skin. Adore the idea of using edamame as the filling within the crispy lightness of popiah skin is wonderful. But I would do without the plain cheese and add a touch of mornay sauce with a hit hint of wasabi. This would also remove the bizarre inclusion of bottled sweet chilli. 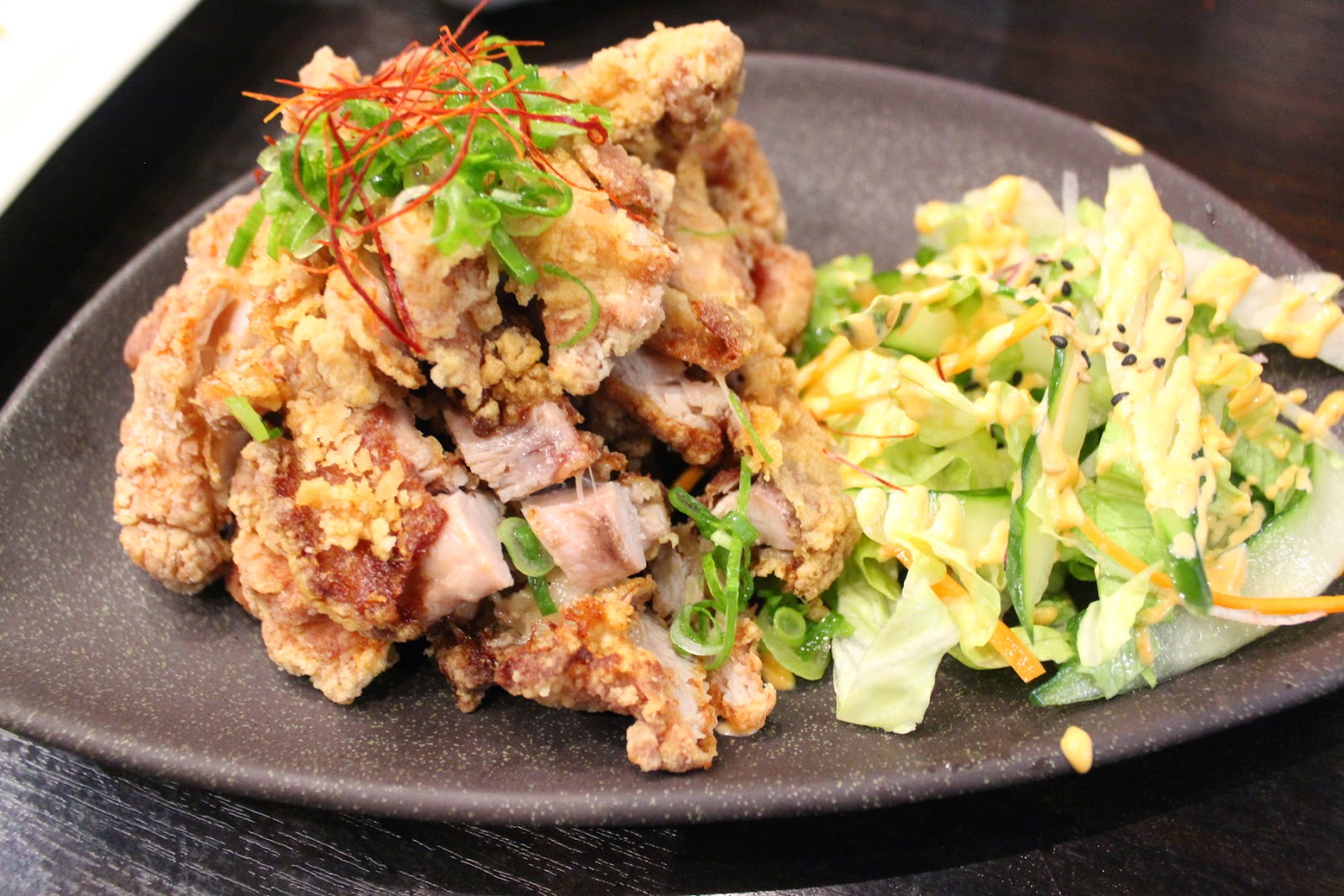 A picture might say a thousand words to some, but this picture evokes savage tearing and devouring of deep fried chicken skin real-housewives style  pure emotions of joy and endorphin rush. Generally not a fan of deep fried food, I tend to steer clear of greasy goodness anything dipped and fried. But commendably, this plate of chicken was crispy, light and perfectly seasoned on the skin and incredibly moist and soft inside. 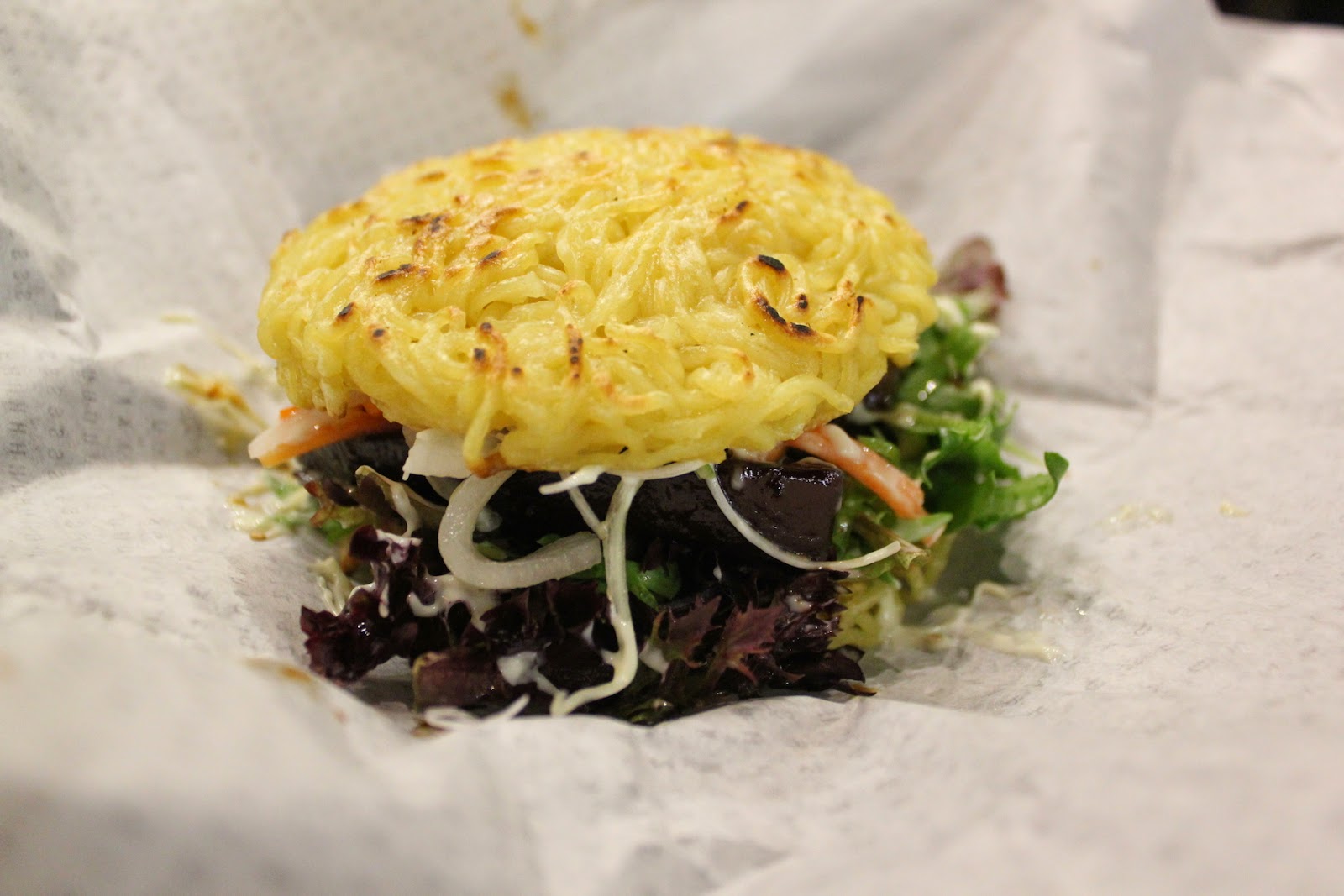 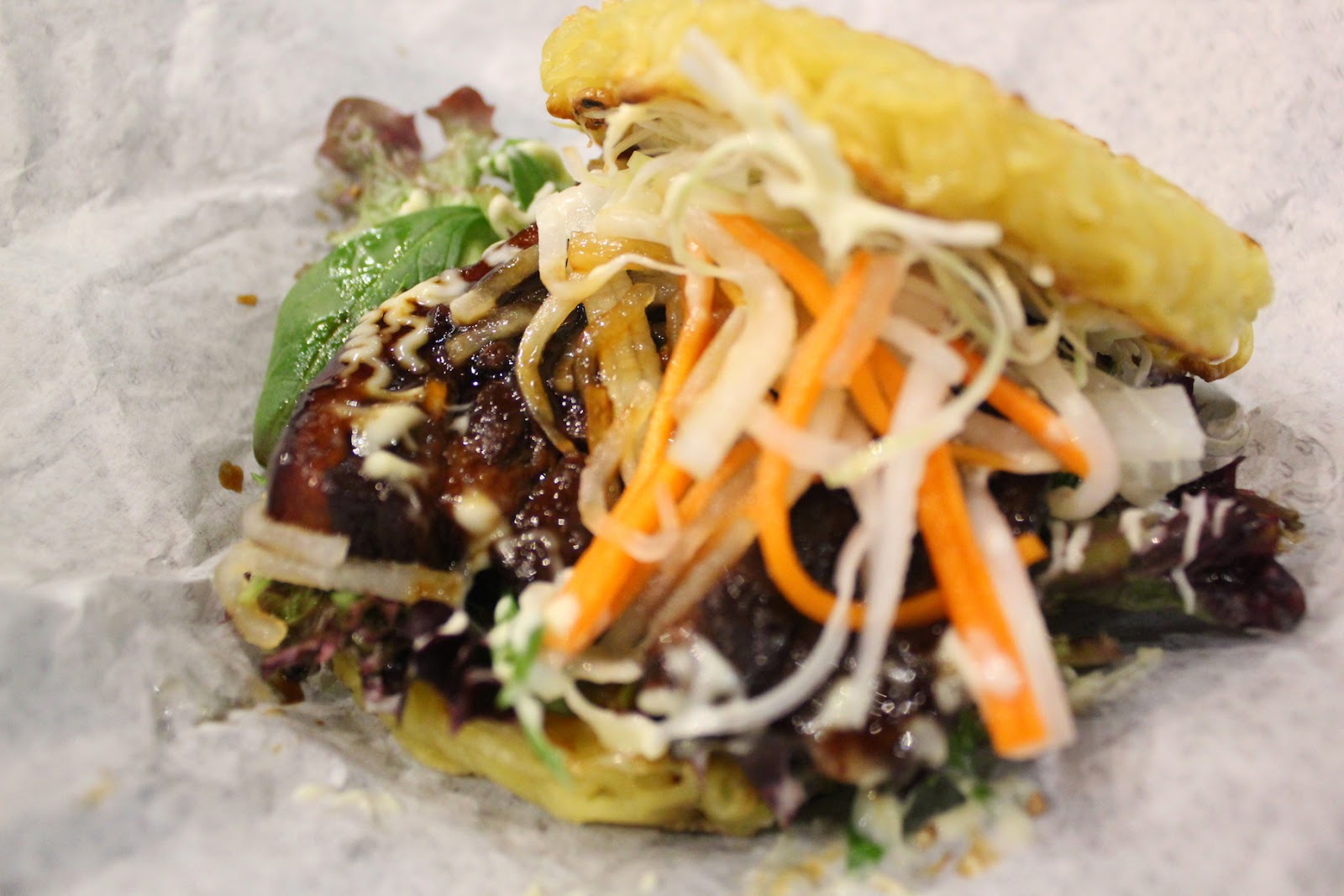 The infamous Ramen Burger. Many have tried and failed. Shizuku's efforts were valiant but there was no rescuing the "buns". The top half was hard and stodgy and the base part was soggy. The slaw was decent but the star of the ramen burger show was of course the braised pork belly. It was soft, dark and cooked to perfection. Tender and caramalised, it is no doubt any carb encasing the pork belly is but a vignette around the main attraction. 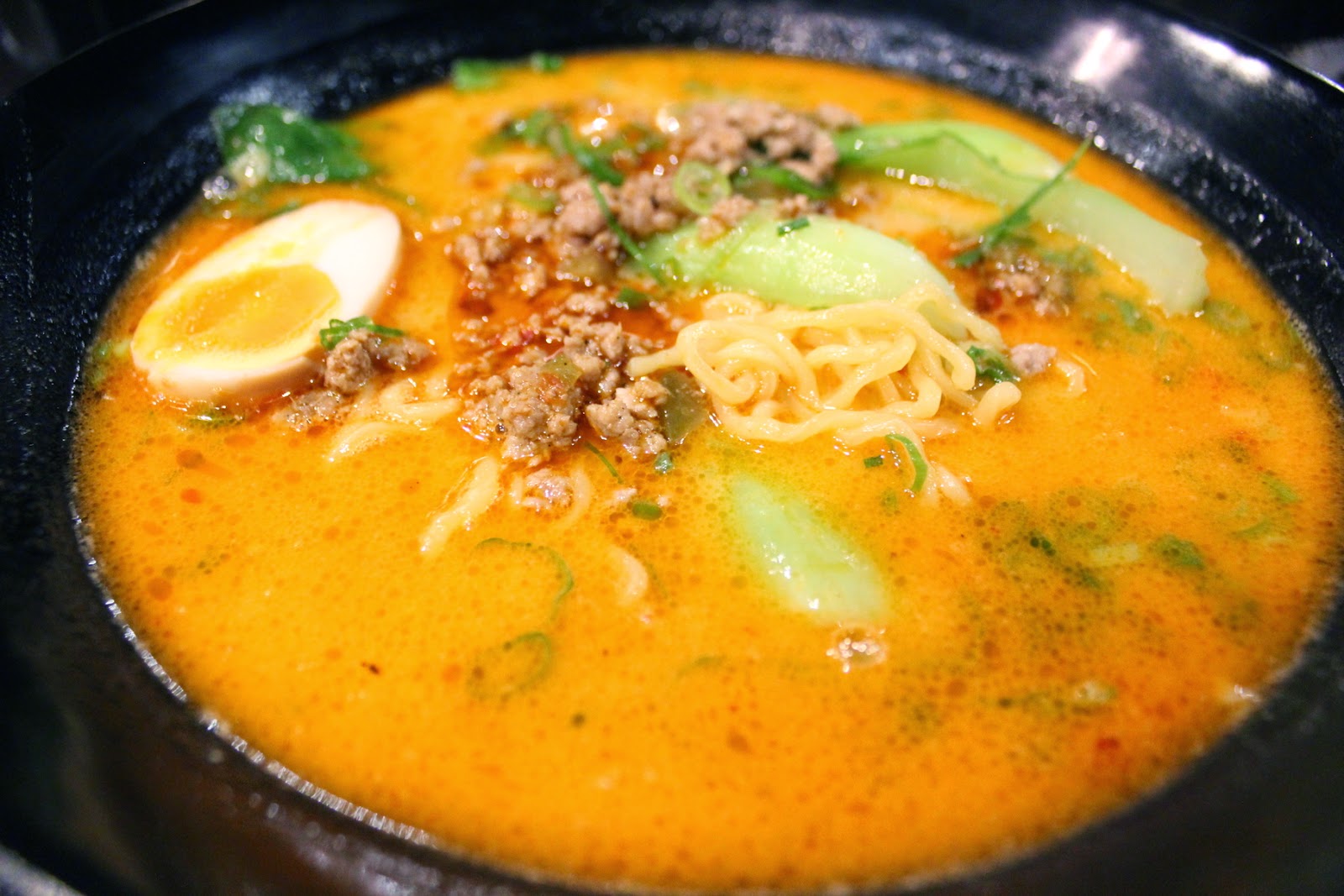 Their signature Tan Tan Ramen is a rich murky strong bold statement in flavour and appearance. All of Shizuku's ramen are made with a base of chicken and pork bones. The overlying essence and flavour profile is that of pork at first taste. S was very pleased with his bowl of ramen. The egg could do with a more oozy yolk for sure and be marinated longer. 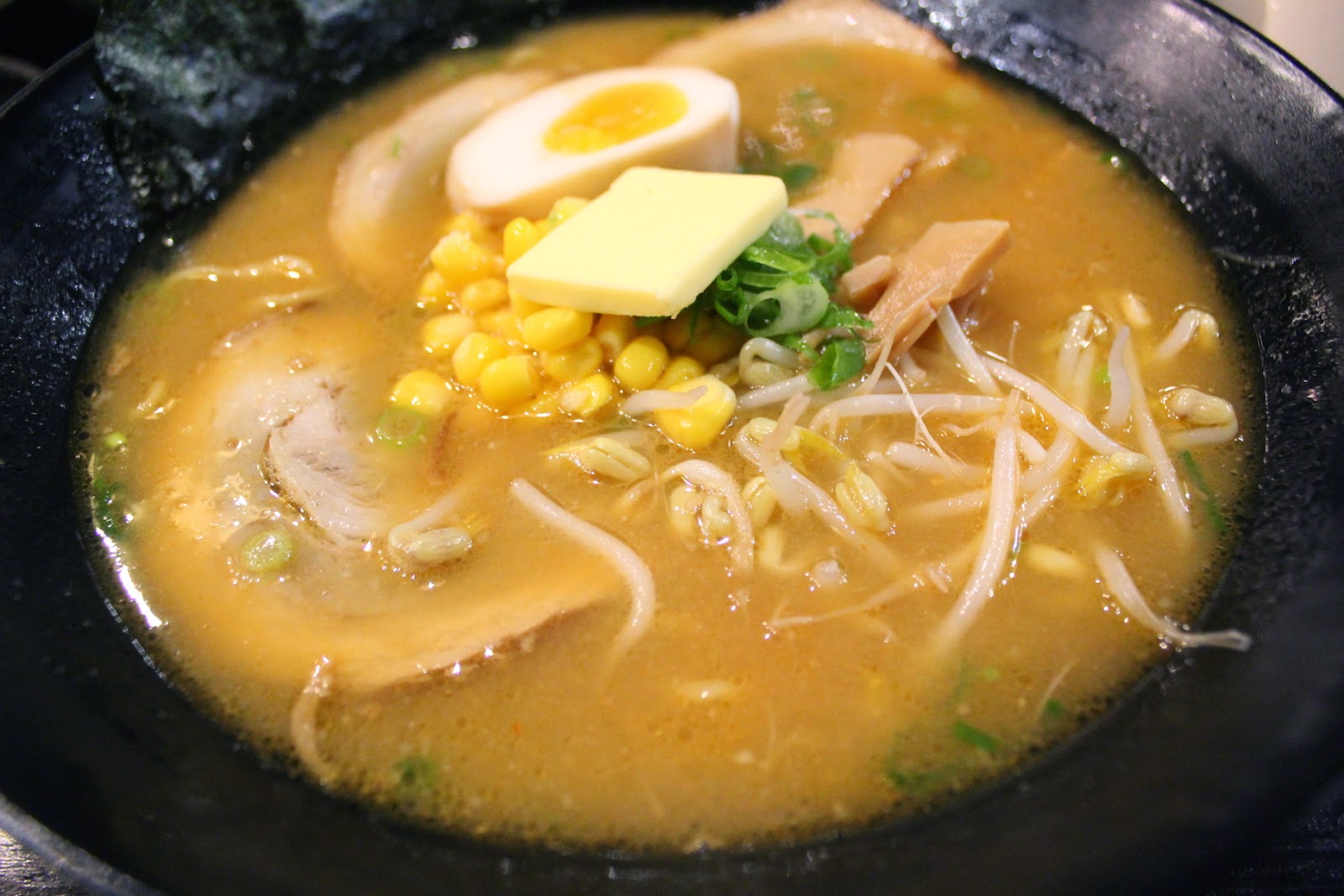 My favourite ramen in general has to be the Hokkaido ramen. I love the butter and corn addition. The broth was still rich but does not pack as much of a punch as the Tan Tan. It could definitely do with more butter but again that's a personal preference. The chefs have scoured Melbourne for suppliers of miso from Hokkaido. Unfortunately none of them carry it here and Shizuku imports them directly from Hokkaido. It is this ethic and passion for the food they serve that I respect in a food joint. The pursuit for authenticity and improvements is continuous for any chef or restaurant.

The noodles overall were yellow and bouncy. We were informed the Japanese chefs are still refining the recipe and perhaps adding a bit more flour to balance the bounciness of the noodles. For what it's worth, I like it the way it is. 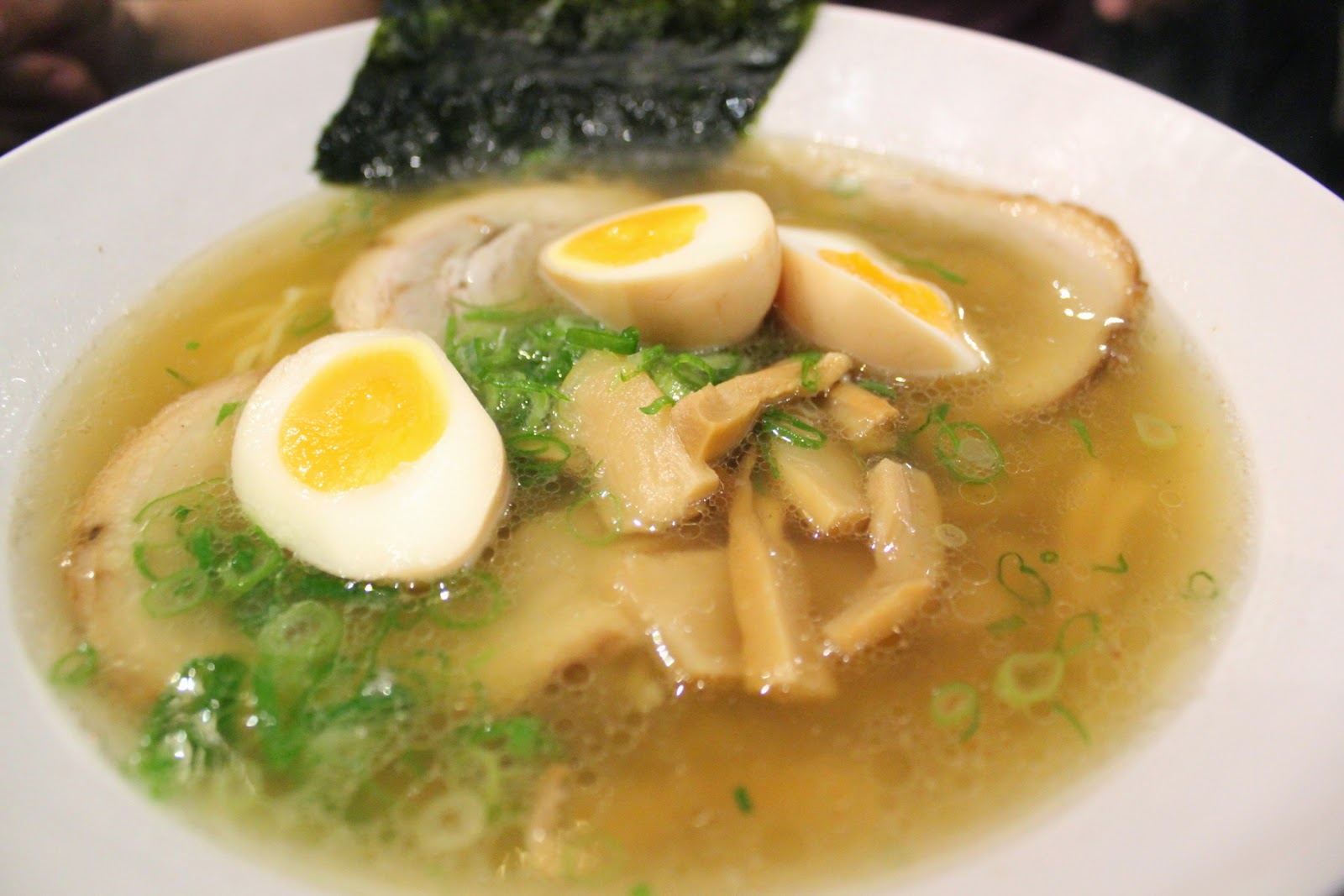 Shio Ramen is not as common here as most ramen bars in Melbourne serve mainly miso or soy flavoured broth. Shio is flavoured with salt. At Shizuku, 3 different types of salt are used in their shio broth - Fleur de sel, Moroccan salt and Japanese sea salt. On the whole, I do find the general taste of all the ramen to be slightly saltier than I'm used to but that's my personal tolerance for salt content in food.

The diner who ordered the shio ramen complained about the fishiness of the broth immediately. However what hit me first was the "porkiness" of the soup as the main strain of flavour followed by a subtle taste of seafood. I adore fish broth and frequently have my soba in dashi-based stock. I like the clearer flavour of this soup over my Hokkaido ramen. 2 very different ramen to be sure but again personal taste dictates my leanings for one over another. We were told the broth was the same base of chicken and pork, with the chefs drizzling a bit of scallop-flavoured oil as a finishing touch. 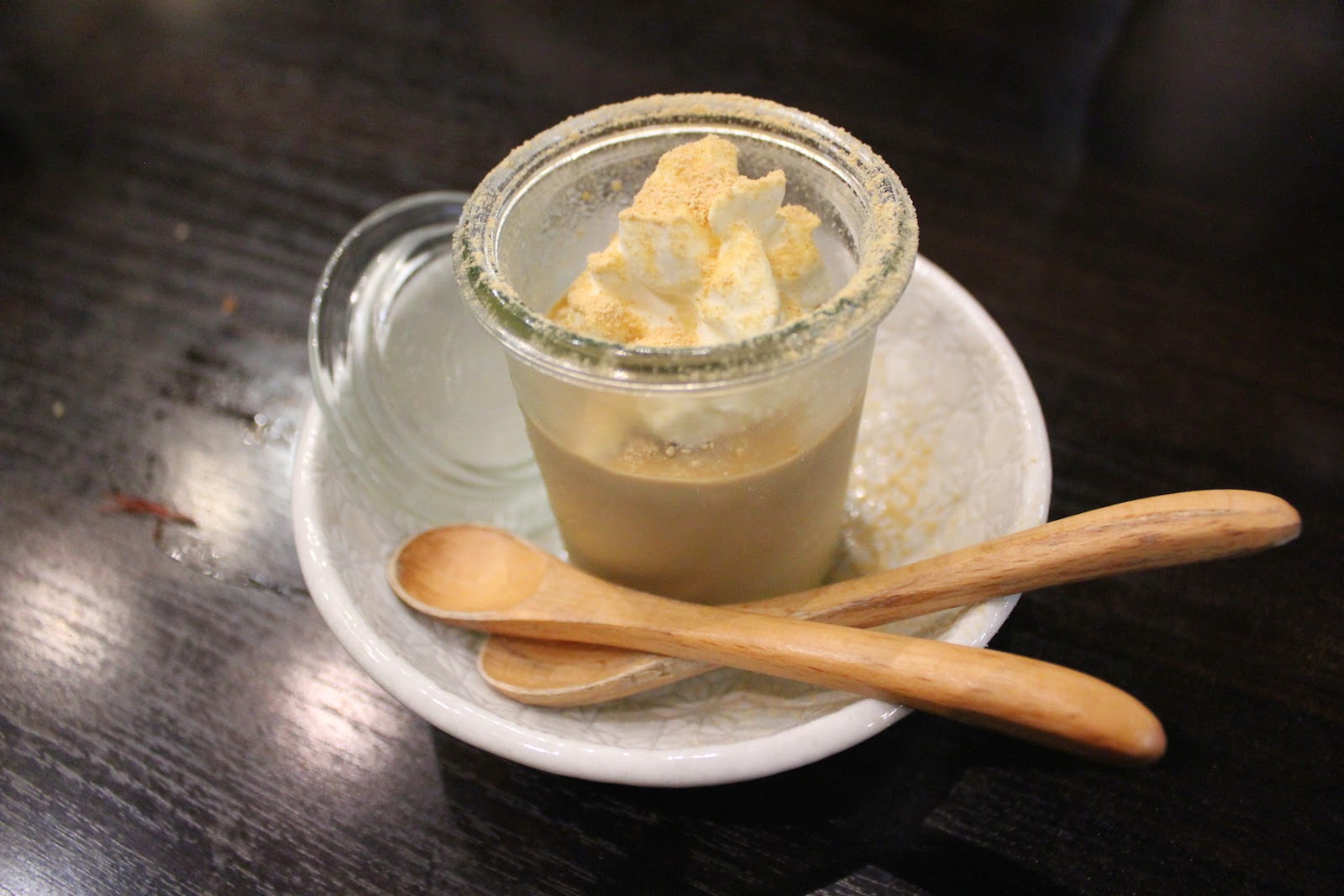 I was told the espresso panna cotta was an absolute flavour bomb. No instant coffee mix in this one. Wonderful extraction of good coffee in a perfectly made panna cotta. 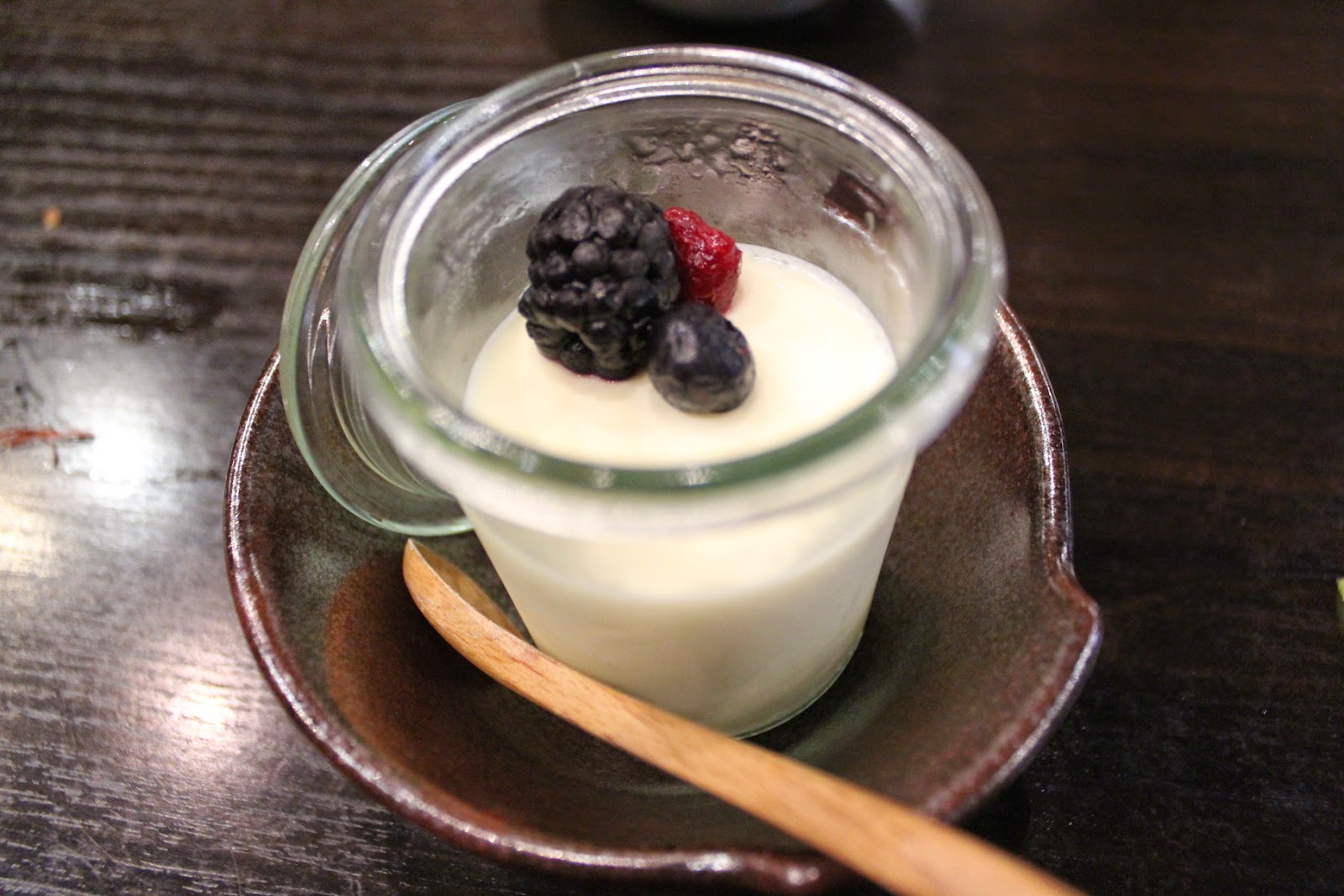 This panna cotta is one of the highlights for me this very night. The smoothness of the texture and the milkiness of the flavour were sublime. It slithered into a smooth thick liquid consistency as you let a spoonful of panna cotta through the confines of the roof of your mouth and your tongue. This is a true test of good panna cotta for me. I could certainly eat many industrial tubs another bowl of it.

The thing I took away from this dining experience is the subjective palette of each diner. The understanding of technical details aside, every individual has their personal like/dislike of certain flavours and how they prefer their dishes to be cooked or flavoured. What turns one on in a dish could just as well turn another off. There is no adamant right or wrong in personal taste. We have been on tastings with several different people with sophisticated and refined palettes completely having different takes on a dish. No one states and defies with absolute authority and discounting all others. It's a common understanding a dish might not be bad, but it's a matter of personal preference.