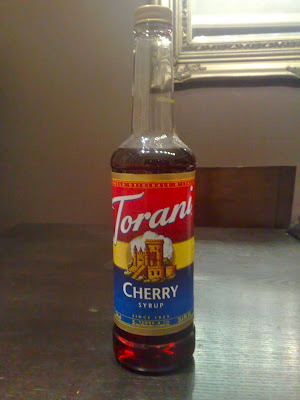 I grew up with the easy availability of Cherry Coke, and addiction does not even begin to describe my insane need to drink a can everyday. Now my mother strictly forbade snacks of any kind during my childhood except on occasions like the Christmas season and CNY. And I promise you, that came around twice a year. BUT that's what a huge Jean-Paul Gaultier school bag is for. Thank goodness she was mostly not home when I walked into the house with my bag rustling inside as the bags of snacks rubbed against each other jostling for space in a bag filled less with books than with the cheesy goodness of Twisties, Nachos, Chilli Tapioca Chips and Calbee Hot n Spicy Potato Chips.

When we moved to Australia, what I missed most was my daily drink of Cherry Coke so I stopped drinking Coke or most sodas (soft drinks), except for Dr Pepper which was sold in Safeway only, for ages until a quite few years ago when Australia introduced Cherry Coke to this country. The taste however must have been modified to suit the Australian market as it was rather different to the American Cherry Coke. But hey, beggars can't be choosers, so I settled for that until the expected demise finally happened to Australia Cherry Coke. Ta-dum-dum. Australians did not take to the taste and I went back quite happily to Dr Pepper (which is similiar to Cherry Coke but not exactly the same). Sadly, Dr Pepper also suffered their eventual demise soon after that.

Anyway, by which time I've already discovered The USA Food Store. They have several American products that were familiar to me in my childhood such as Post cereals (Cranberry Almonds and Banana Nut Crunch are my faves), Combos cheese pretzels, blah blah blah and CHERRY COKE! Yes, direct from America, my Holy Grail drink. Who cares it's $39 for a carton of 24 cans? The addiction was well and truly back! It runs in the family as my dad is totally into Cherry Coke as well, much to my mother's disapproval. Needless to say, I stocked up and have continued doing so for as long as they have been stocking it. To those interested, these guys also stock Cherry 7-up, Dr Pepper, A & W Root Beer and heaps of other yummy sodas.

Despite that, I've always thought if I have my own Cherry Syrup, then I could add a few drops of it to regular Aussie Coke and voila! Cherry Coke at a fraction of the price. However, I just could not manage to find Cherry Syrup in Melbourne even after searching through all the gourmet delis. Finally, a girlfriend from the US heard about my crazy addiction, and was kind enough to send me 3 large bottles of Cherry Syrup, which then resulted in.... 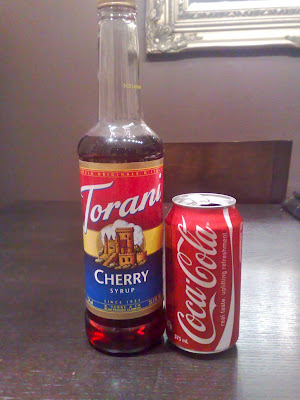 The Torani Cherry Syrup (US$7.99) is one of the better brands of Cherry Syrups out there, and I added about a small teaspoon to one can of Coke. Surprisingly it did seem to work quite well and I do like the subtle aftertaste of cherry flavouring in my Coke. I won't say it's the same thing as the actual Cherry Coke from the can, but it does its job. S thinks it reminds him of cough syrup but I don't mind it at all. I do recommend adding ice to your coke if you are using the Torani syrup as the more you add, the sweeter the drink becomes bearing in mind despite the cherry flavouring, it is still a syrup.