Straits Cafe
694 Doncaster Road
Doncaster VIC 3108
03 98081845
Living in the bayside area of Melbourne, we are far from any "authentic" form of Asian cuisine, at least not those deemed authentic by the seasoned Singaporean and Malaysian taste buds. Jolted out of my inertia the other day, I had a sudden craving for Or Luak (Oyster Omelette). No doubt inspired by an MMS pic from a friend holidaying in Singapore featuring the starchy delicious hot mess of oysters, eggs, tapioca-potato-flour and spring onions.

So I decided to ask my good friend Google for a recommendation. I knew I had to travel east to find some sort of half-authentic version of this dish. Now I've been to Straits Cafe in Doncaster a few times over the years to know that Tony, the at-times cantankerous chef does a decent job of frying a mean Char Kway Teow and Hor Fun. I could never get used to calling it Sar Hor Fan like the M'sians. I didn't know they have started frying Or Luak but apparently only on 2 select days of the week. What do you know, this was my lucky day for once after a whole year of tragic circumstances.

Poor S was suffering from sciatica but was game enough to rev the engine and make our way to hawker mecca with a 45-min day trip to the eastern land of Asian congregation. 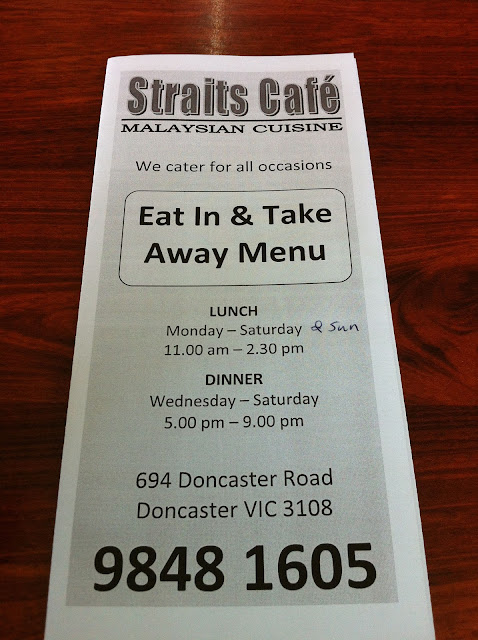 After placing orders for Or Luak, Char Kway Teow, Lo Bak and Rojak, S decided to head to Chemist Warehouse for some Voltaren. So guess who was left sitting alone with all 4 dishes arriving at once trying to ignore the gasps and shocked looks from the petite Asian girls who were struggling to finish a quarter of their har-mee and the men thanking their lucky stars on the money they save from not dating a glutton. Don't they know fat people never hoe down in public?? Yes size 10 or 12 are XL and XXL in Asia.

So this is how it looked: 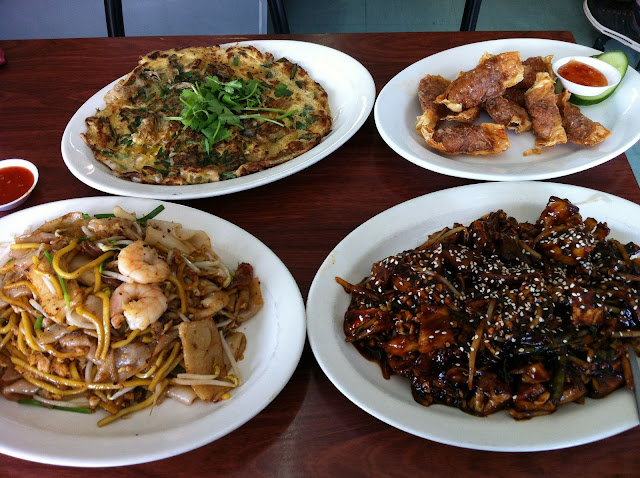 The first dish I tucked into was Or Luak (Oyster Omelette). It is important to note that the dipping chilli sauce is essential to the dish. No matter how nicely done the Or Luak is, an insipid chilli dipping sauce can spoil the taste.

In this instance, the Or Luak itself was literally more like an omelette than the gooey starchy fry-up it usually is. Straits' version is more like a flat pancake-like egg omelette with chives and oysters. It is perfectly acceptable but lacks the exciting piping hot sensation you come to expect visually and gastronomically to fill you with the aroma of garlic, mashed up eggs and oysters. The gel-like starch of tapioca and potato flour mixed with undercooked eggs, chives clinging to fresh oysters still oozing with juice and garlicky goodness is just missing.

The chilli dipping sauce was a huge disappointment. It was slightly tangy, as if making a polite concession to the original version. It needs to have that robust unapologetic sourness of lime juice and vinegar with the spiciness of pounded chilli padi and pungent punchy taste of shallots. There is no zing. But it wouldn't be fair to expect the hawker version so true to Singapore hawkers and Malaysia's street vendors. So as far as having the pleasure of eating something that resembles the real thing, Straits probably hit the spot with the Or Luak, albeit a weak one. 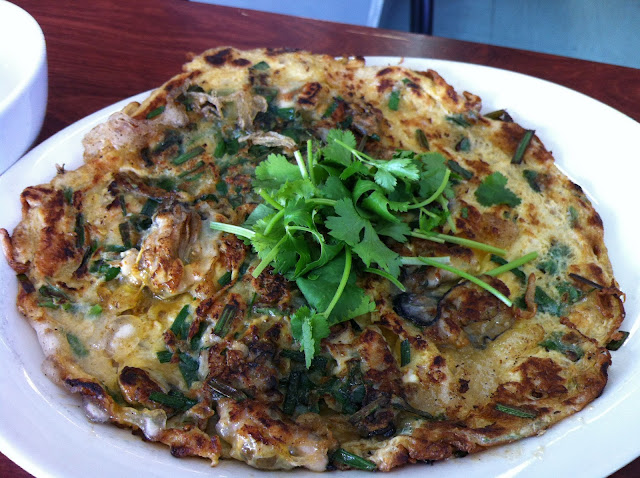 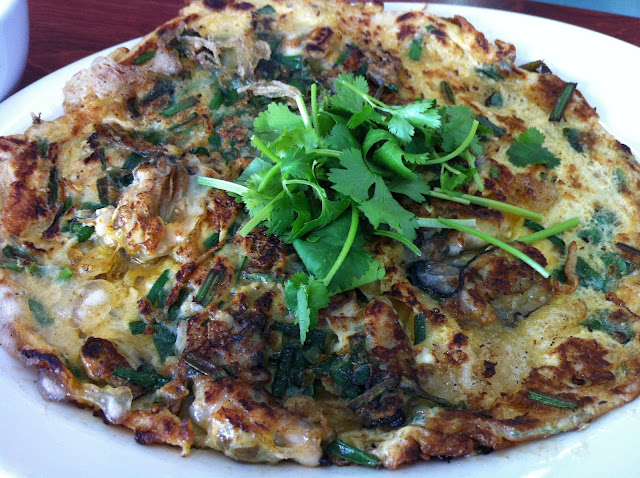 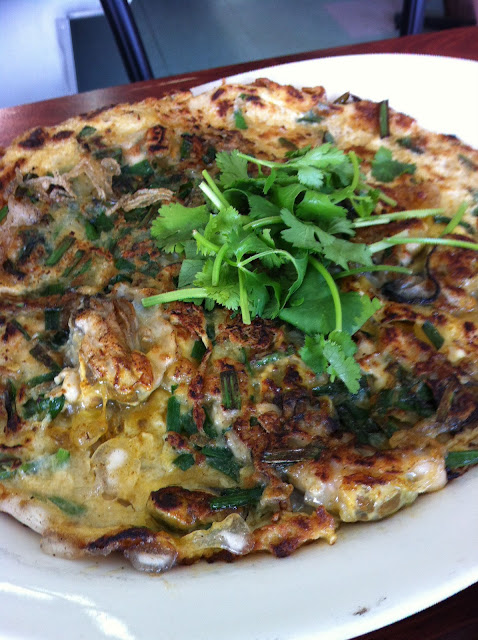 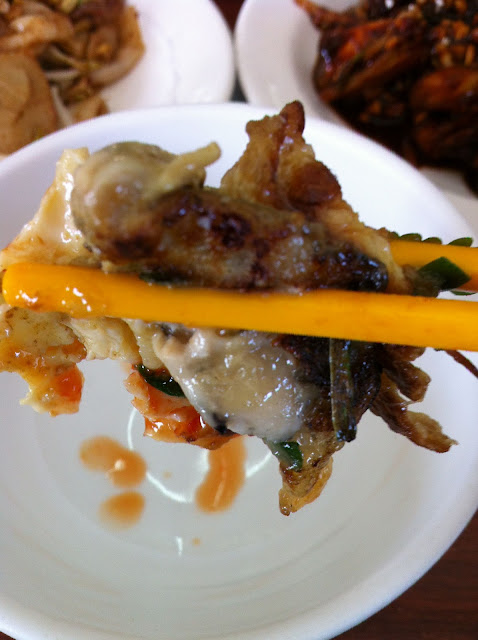 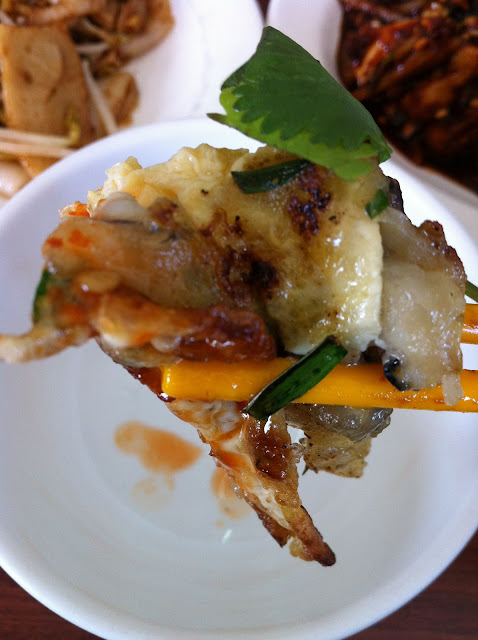 Kudos to the Lo Bak, or Ngoh Hiang as we refer to this dish in Singapore. I've always loved the Lo Bak here. They use chicken instead of pork and it's in strips rather than minced. For some reason the texture reminds me of fish or prawn paste but it's not. Superbly juicy, the filling is flavoursome and moreish. The beancurd skin is crispy but they were generous with the filling so there's not much of the skin that's spare. 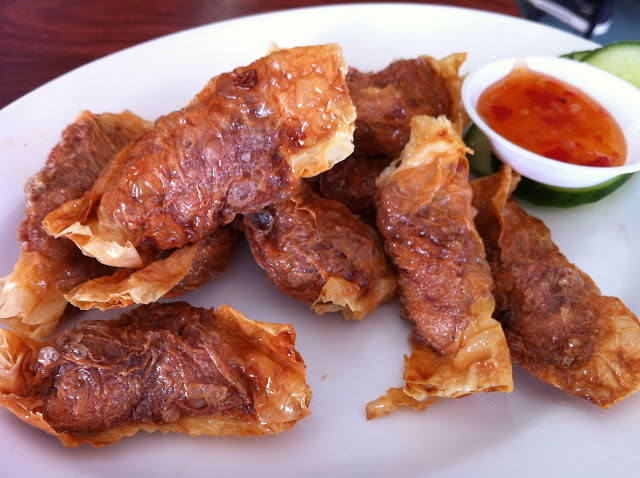 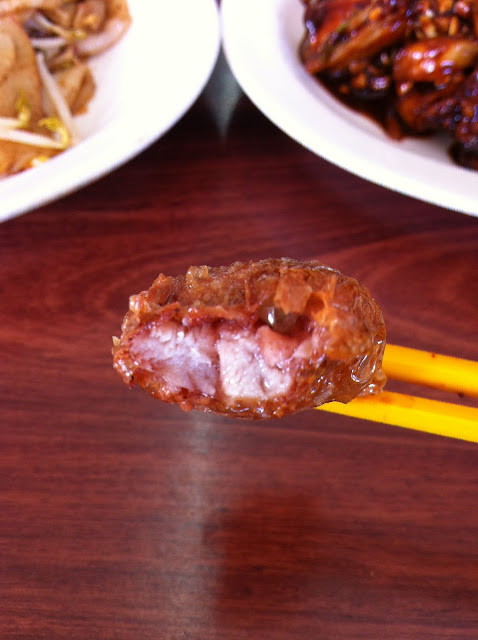 The most dependable and star dish here is the Char Kway Teow. But on this occasion, and I can't pinpoint why, it was just average. Perhaps the really busy lunchtime crowd and huge takeaway orders were putting pressure on Tony to fry as quickly as possible to meet the demand, but I can guarantee the standard is normally much better than it was today. What can I say? It is what it is, we all have our up and down days.

After a couple of mouthfuls, we decided to take it away. When we asked for it to be taken away, the waitress said she'll give us a box, then she started serving other people and forgot about our container. So I took it up to the counter and paid at the same time. The container was in her hand but she made me take the plate back to my table with the container to do it myself. Do note they charge 50c for the container, it's calculated in the bill and you won't be advised about it in advance. 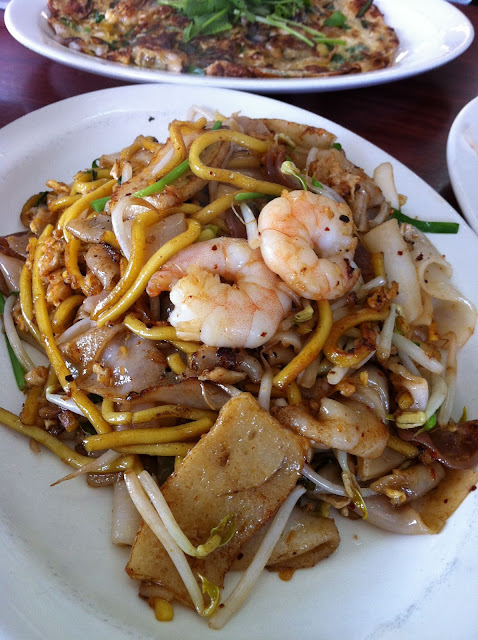 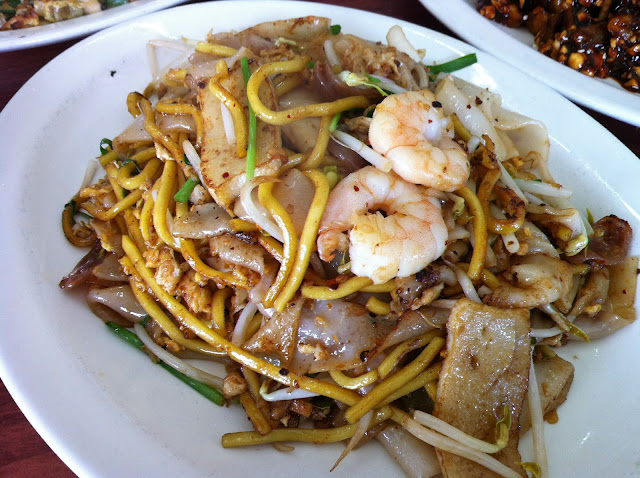 The Rojak was delicious. Straits was extremely generous with the sauce and crushed peanuts. The few pieces of mung guang (yam bean) adds a great crunch to the texture. The blandness of the mung guang goes perfectly with the thick rojak sauce. It wouldn't be fair to expect them to use as much mung guang as they do in Singapore or Malaysia. At between $9-$11 a kg, and as generous a portion as Straits provide, it just doesn't make sense to put mainly mung guang in there. However you can hardly tell the difference with the substitutes - granny smith apples and pineapples. I've done without the cucumber and tow pok in my rojak, preferring to stick to mainly fruits in it. They do have kang kong veggies and my fave cuttlefish in there. The cuttlefish goes incredibly well with it. 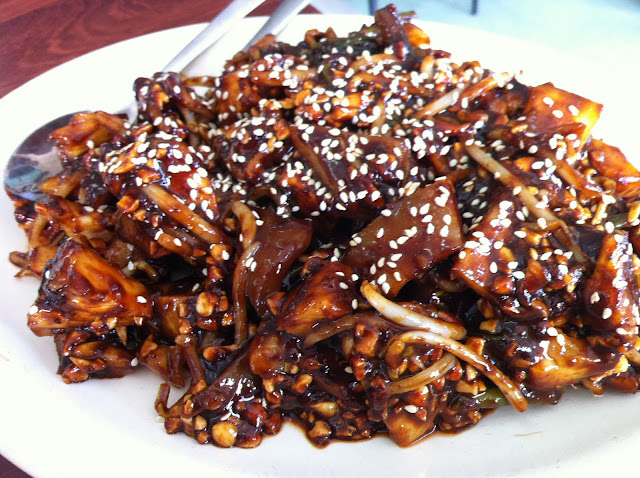 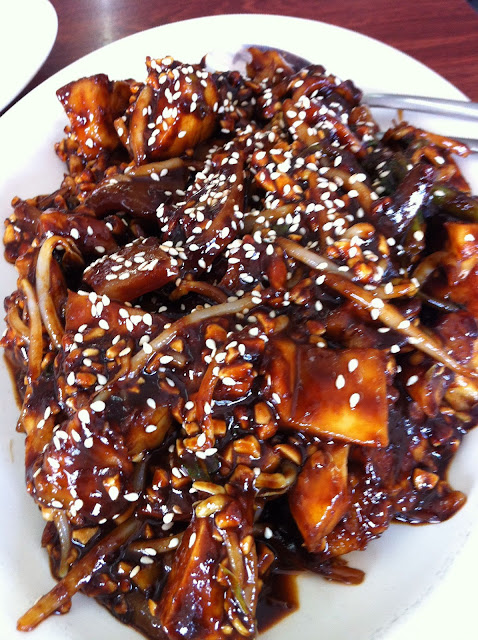 Straits Cafe in Doncaster is no fine-dining establishment, but you know what? I kinda like that. Somehow having hawker food in a posh environment makes me think it is probably not all that authentic. But if a cafe environment is what you are looking for, go to Straits Cafe in Wantirna. It is managed by none other than Tony and Helen's son and daughter-in-law. If you do go on the weekends to either, their Popiah is not to be missed, you've been tipped!
Email Post
Labels: Lo Bak Or Luak Oyster Omelette Penang Char Kway Teow Rojak Straits Cafe Doncaster Melbourne Review